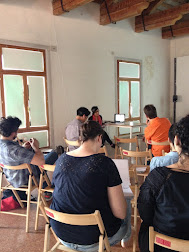 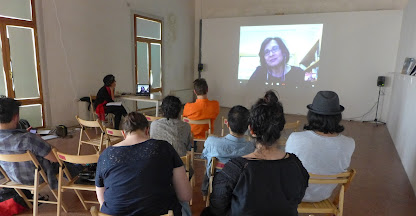 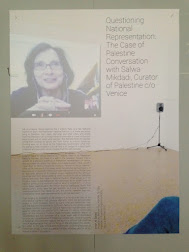 Let us imagine, Venice Biennial, the X edition, there is a new National Pavilion in town; the Palestinian National Pavilion. In it, there are artists living in Palestine, from Gaza, Ramallah and other cities, and artists from the Diaspora. Let us imagine that all were able to travel, no borders were closed and no visas were rejected. The themes inside the pavilion varied from ecology to beauty and from humor to cultural discourse. Funding was not an issue, as the Palestinian Government rather than the authority had included a cultural fund in its budget to support such initiatives and exposure. Let us imagine that this was possible.

Now go back to Venice Biennial 56th edition, there is no Palestinian National Pavilion, but there is a wall in the Research Pavilion that is evident of a previous existence of Palestinian representation in Venice. Not as a national pavilion but rather as a collateral event. What would it mean then to have a Palestinian National Pavilion in Venice Biennial? What is the National in this sense, while the national representations in biennials are in question? There have been discourses to no longer have to deal with residue of a colonial project representing the stronger countries and then slowly allowing other countries to join as collateral events that may then have a National Pavilion. What would such an initiative mean to the Palestinian representation: to no longer have the national although the national could be what is longed for?  In 2013, Yazid Anani questioned in the Venice Biennial Ideological Guide that longing and I quote here his last question: Is it truly a question of misrepresentation that needs to defy the central narrative that has, nonetheless, never been represented at the Venice Biennale?

That longing to represent or be present in a world-scale and on an international platform had previous attempts. From the less concrete project in 2003, Stateless Nation by Sandi Hilal and Alessandro Petti with the dispersed passports, to 2009 with Palestine c/o Venice curated by Salwa Mikdadi marking as the first Palestinian representation, and lastly to Otherwise Occupied in 2013. Palestine c/o Venice, which took place in the Research Pavilion: Experimentality exhibition space, is nevertheless the first exhibition of a larger scale with a committed location and representation of Palestinian artists born, living or working in Palestine. This exhibition opened the door to a different transnational kind of representation that did not focus on the occupation nor identity, but rather on the lives, voices and the everyday projects of conceptual Palestinian artists, it made it possible for later initiatives and for artists to work in spite of occupation.

VIDEO WILL BE ONLINE SOON